Unnamed daughter(End of the manga)

Momo Kashiwabara (柏原 もも, Kashiwabara Momo) is a supporting character. She is a member of the Literature Club and a friend of Rui Tachibana.

Momo is a teenage girl of medium height with shoulder-length reddish-brown hair that is commonly done up in pigtails with bangs hanging on the left side, blue eyes, a very curvaceous body/alluring frame and large breasts that she often uses to her advantage in front of boys and it causes rampant jealousy from other girls which makes them treat her with disdain, if not outright hostility.

Her uniform is also worn much more messier than the other characters with her jumper having longer sleeves that reach halfway up her hand and a poorly arranged collar. She also wears skirts a size or two smaller than normal, evident from how just running from Natsuo Fujii was enough for her panties to be shown.

As shown in Chapter 16, she also has several overlapping scars on her wrist from her "short phase" of self-harming. Very few people, save for her sexual partners and Natsuo have seen them, with the latter being the only one who empathized with her.

Momo fits the 'Genki' female archetype in manga as she is constantly a energetic girl with a bubbly personality who is also incredibly eccentric and overly friendly to some people as shown when she gave Rui Tachibana a nickname and one of the dolls from her bag upon their first meeting. As noted by the girls in her class, Momo is also very flirtatious towards boys, flirtations that are rumored have evolved into sexual relations on more than one occasion. She also exhibits a childish side, as shown by her nicknames like "Rui-Rui" and calling sex "making love-love".

As of Chapter 10, she has a massive crush on Natsuo Fujii, which has often gone to obsessive extremes like clinging to his arm and feeding him boxed lunches she made without his knowledge.

However, beneath her flirtatious and bubbly nature lies deep vulnerability and a possible self-loathing. As revealed in Chapter 16, her parents have a very bad relationship and the are almost always working, which leaves Momo by herself for nearly whole days on end. As a result of this and her poor relationships with her peers, she once began self-harming. One of the reasons she loves Natsuo is due to the fact that despite knowing about her self-harming and her attitudes towards boys, he is still nice to her.

It is shown that Momo is actually very smart despite her childish nature. In Chapter 20, Miu Ashihara notes that she knew Momo's name because she often sees her name in the top-ten school rankings. In Chapter 23, she mentions that she doesn't need to write notes in class. The reason her test scores drops on occasion are because she was in a relationship during that period. During the School Festival, she was able to see through Saki Kusumoto's lies where she deduce (arrive at (a fact or a conclusion) by reasoning; draw as a logical conclusion) her relationship and grudge with Reiji Kiriya.

Momo is infamous throughout the school for having many boyfriends, some of whom she had intimate relationships with. Because of this, she is often treated with disdain and even outward hostility where in spite of that, she tends to remain positive and takes the harassment in stride.

Momo has a hobby of creating little sewn dolls. She tends to make one for each person she meets with what she perceives their individual characteristics. Momo tends to carry these around on her backpack or purse, much to the chagrin of other students. 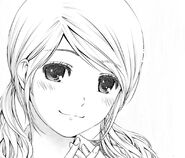 Add a photo to this gallery
Retrieved from "https://domestic-na-kanojo.fandom.com/wiki/Momo_Kashiwabara?oldid=9200"
Community content is available under CC-BY-SA unless otherwise noted.